Time for a Change

“This went a lot more smoothly than I imagined, and it was built with little room for error.  It fit perfectly, though, and that’s not easy to do. Handmade casings are always a tossup.” The horologist closed his bag and wound the clock in synchronicity with his phone. “It’s quite the unusual setup, but it runs exceptionally well. It kept up with my clocking with little to no loss. You also did well to listen to my suggestion of felt foot pads. You’ve leveled it out perfectly.”

“I’m glad to hear it. Has the quote changed, or is it something different?” He sat back a moment to admire his grandfather’s handiwork. The brass tones glittered in the light of his new chandelier, the fixture he had toiled and cursed to set up. Most of the house was sewn together with his profanity and toil. It made for a reliable suture.

“It’s the same. Man, check out how well it matches your table. You couldn’t have planned that better if you tried.” The horologist stood back to look at the drop leaf table in total. Indeed it matched. It also matched the floor and the walls. All of this came together with only a bare minimum of forethought, a series of independent choices tying themselves together without any effort.

“Yes, that’s always a bonus.” He broke the check neatly along the perforations close to the spine. It was a healthy sum. A sum from sacrifice and sweat, but he’d be OK. He was a survivor. He knew that it would be a can of beans here, a stay-at-home weekend there, and he would have recouped his savings after a while. He wasn’t sure how long “a while” was specifically, but it did exist in some quantity.

The deed was now done. The help was paid in full, and the clock was functional again for the first time in more than three decades. He sat down at the kitchen table again and stared at the finished project. It chimed with soft Westminster tones he could only translate into gratitude. Like the gasp of a patient brought back from dead, it was alive again.

Sitting in front of him, the phone became a reminder of the finishing touch. Thumbing through the address book he called his mother. A drowsy voice took the call.

“The guy who worked on it was really impressed. He said he was worried it might not fit it was so tight, but the movement gave him no hassle. It was as if the case was custom built for the clockworks, and that’s machine-quality milling.”

A sniffle was the only reply, but he immediately knew it wasn’t from an early onset of the flu season. He knew the story. She lost he father before he was born. It wasn’t a seamless account, as he had to glue the pieces together like a broken vase, but he knew enough. The details weren’t important anyway.

“We had no money. He worked so hard. He was so good at it.” The voice was full of remembering. Memories too painful to frequent, but too precious to let go. He clutched his fist and grit his teeth at the sorrow.

“I know you didn’t, mom. I know.” It takes strength to stare down suffering, when you’re the anchor in a conversation.

“I miss him… so much…” choking all over her words, she made a few “hups” to hobble through it. He knew she was unable to pull the resources together to do much of anything with it. The bits of inexpensive decor laid upon it for the last thirty years would make for a small memorial to its maker. They were the token acknowledgement of its existence. It must have been killing her to see it that way for so long.

“I would like you to stop by and listen to it sometime.”

Another sob came over the line ending with, “I would love that very much.”

There had not been a time in his life where he doubted his role in all of this. He just never knew the why until the very end. Today, he had done right.

I’m On the Nightrain

Guns N’ Roses indulged in the classic 80s excess Americans enjoyed before the ever-disappointed slab of alternative music cooled teen America in the 90s. I’m not being critical of the 90s music scene, as I was very much a part of it (and ever-disappointed) as anyone else. I loved it, and still do today. Here, have some R.E.M.:

That’s for mainstream America, because it’s accessible. Here’s a young Corvidae’s jukebox in the 90s:

Back to my original thought. The song “Nightrain” has the musical feel of the steam-powered battering ram that is my drive. I’ve been told several times I’m “intense” in conversation, and what people don’t understand is that it’s an extension of my ambition. It’s steady and slow to yield, much like a locomotive. If I retire for the night, you can be rest assured I’ll be back at it soon enough until the job is done.

Today marks the first anniversary of the purchase of Stonefield (my house). I’ve marked the occasion with the completion of the walnut table. It has turned out reasonably well, but has taken over two weeks and $150 to get it back into service. Not many of my contemporaries have that tenacity anymore. I often see people let tasks slide to the point of decay, as this house would have been a perfect testament to that a year ago. It’s far from remodeled, but it’s at least comfortable now. 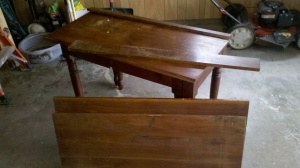 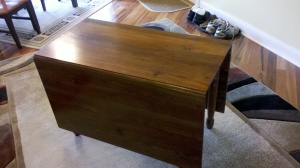 I find it very rewarding completing a job without quitting. In fact, I think my personality is primarily based on goal achievement. The happiest moments in my life were the times I have nailed all the goals I set for myself. The lowest were the times I couldn’t complete the simplest of tasks. I’m actually an active person. I need to sweat to feel good, and this feels wonderful.

Now that my chores are done for the day, I think it’s time to stop by the local bar and celebrate. Cheers!

Dutiful to kinder and country

With faith flaking a ruddy face

Bearing witness to a contract’s breach

And glances askance by other parties

Clutched in fear with selfish concerns

Truer solutions are beyond one’s reach

Old and tired from a century’s work

Rest is the best rescission

In truth, expectations are nigh to nothing

When agreements are honored not

Last Friday I ruminated on the building decay in town and how other people aren’t willing to step up to the plate to prevent urban blight. This is not advocacy for mandatory civic duty in as much as it is a candid critique of American operating philosophy.

As I see it today in 2013, people are not acting with the due care needed in public. We have romanticized individuality to the point of caricature. This caricature believes that it’s someone else’s responsibility to keep and maintain anything of public interest. If one’s name is not on the title or deed, then one is not responsible for any of it. Even if it is, action is debatable.

The easiest, and most visible, proof of this is the amount of litter permitted to lay on the roads and sidewalks of this country. New York City is atrocious about this, but on the other hand it could definitely use a revamping of waste disposal methods. Albeit a fruitless endeavor, I keep to a belief of picking up litter, if I see it. Yes, this means getting one’s hands dirty. Yes, this means worrying about a mess someone else created, but I do I anyway. Just because I didn’t create the mess doesn’t mean I’m scot-free to ignore it.

Another phenomena is the wanton development of a municipality without consideration to the existing infrastructure, resources, or body politic. It is understandable that some people in the community may be reticent to demolish the older buildings, but it’s really too late to save them. There’s a time and place posterity, but there’s most certainly a time to start anew. History is, and always will be, in the making.

Someday I may take pictures of Hooterville, but for now my poem will have to do.

The Passage of Time

Past these fields of yellows and greens

to  show destinations to and fro

Movements in time, familiar yet hazy

change through a celestial lens

A longing as far as the lifeblood flows

remains slightly out of my heart’s grasp

to a place of separation anxiety

Specters of history dance in the distance

Eager to capture its true meaning

I wonder if I’m the hunter or the haunted

I know this is fairly rough on the eyes and without much in the way of rules, but the importance isn’t for the public. It does give a decent window into what I hear in my head at times though. The meaning is very personal to me, and encapsulated my thoughts last night at dinner. Mind you, this was at a Wendy’s next to a young redneck with a torn muscle shirt and a trucker’s hat.

Sunday was full of driving and reading, as Saturday was full of heavy lifting and grunt work. The labor was fruitful in a sense, as I’m now in possession of two family heirlooms. Both of them need maintenance, but I know it’s nothing out of my capacity. A winged table will need to be reassembled and refinished while a grandmother clock needs a call to an horologist (I like the French term better, pendulier). I believe the clockworks are in need of some fine tuning.